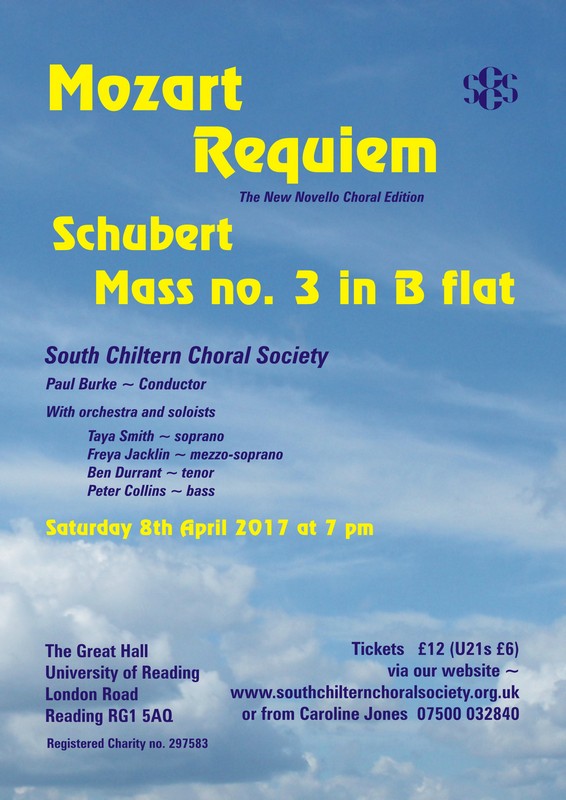 ON a warm spring evening the audience at the University of Reading’s Great Hall was treated to a lovely concert of choral music — Schubert’s relatively little known Mass No 3 in B flat followed by Mozart’s iconic Requiem.

Both were performed with clarity, poise and enthusiasm by the South Chiltern Choral Society led by Paul Burke and accompanied by four able young soloists — Hannah Fraser-Mackenzie (soprano), Katherine Cooper (mezzo-soprano), Ben Durrant (tenor), and Peter Collins (bass).  Katherine, who was a late stand-in, was particularly impressive, along with Ben and Hannah, who had a voice well suited to Mozart — I could easily imagine Hannah in Cosi fan tutte.

The evening started with a fine rendering of the Schubert mass.  Written when the composer was only 18, this is a typically ambitious, exuberant and rich piece encompassing a wide range of musical moods ranging from the “credo” with its plainsong melody above a scurrying orchestral accompaniment to the dance-like “Agnus Dei” conclusion.  The choir, soloists and orchestra combined well to capture all these aspects.

Refreshed by free soft drinks the audience settled down to the second half.

What can one say about Mozart’s Requiem? Its history and the splendour of the music make it one of the great and most moving choral pieces.  The choir, orchestra and soloists again combined well to do it justice.  The mass and the requiem presented a substantial and largely uninterrupted volume of singing and this was reflected in a marginal loss of sharpness at a few points during an otherwise excellent performance of the requiem, which was greatly appreciated by the audience.