The Sprig of Thyme 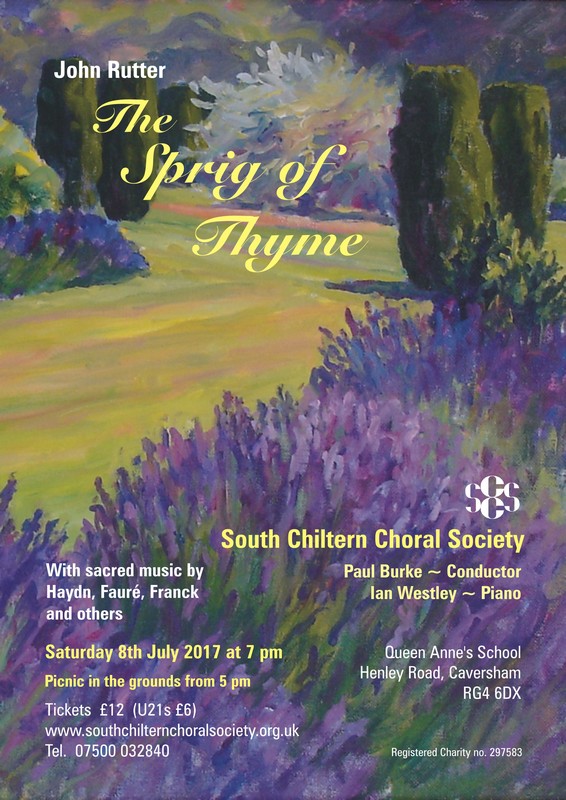 HOT and happy are the words that best describe this rewarding and very pleasant encounter with the South Chiltern Choral Society under its new conductor and arranger, Paul Burke.

After picnicking in the expansive grounds of Queen Anne’s School, a substantial audience strolled out of the hot sun into the main building for a choral concert.

The programme began with John Rutter’s The Sprig of Thyme, an instantly accessible arrangement of 11 well-known English and Irish folk songs.  Rutter wisely kept the original melodies largely intact, harmonised them simply and used the piano accompaniment effectively to add colour and harmonic adventures.  The choir immediately revealed their greatest attribute — superb diction, which they maintained throughout the concert.  Every word of these timeless songs came over clearly, with Paul Burke’s very precise conducting sealing the deal.

Sopranos and altos outnumbered tenors and basses by two to one, but we were spared the all too often encountered nightmare of too few red-faced tenors straining to be heard at all.  On the whole, a reasonable balance was achieved across the voices.

Halfway through Rutter’s opus there was a diversion in which the choir’s accompanist Ian Westley gave a brisk performance of Percy Grainger’s Shepherd’s Hey. This much-loved and quite challenging piano solo met with strong approval from audience and choir alike.  Mr Westley followed it up in the second half of the programme with a powerful performance of Karg-Elert’s organ masterpiece Prelude on Nun danket alle Gott, using a choice of bass organ stops that meant you could feel the vibrations through your feet!

The main offering after the interval was Haydn’s clever and delightful Little Organ Mass. This was sung expressively and with greater confidence than the Rutter work, Haydn being a staple diet for most choirs.  A thinness of tone, that had occasionally been evident among the ladies’ voices in the Rutter songs, was overcome here with a more robust timbre.  Victoria Alexander stepped forward from the sopranos to sing the solo Benedictus with a clear angelic sound that carried well. She should relax when going for the high notes. They were all there. She should have confidence that they always will be.

The concert ended with four short choral works by Brahms, Mendelssohn, Fauré and Franck.  These were sung well but, as a group, offered little contrast — a programming issue to note for the future, perhaps? But their accurate performance was well received by the audience.

After the final applause an encore was given — a charming arrangement by Paul Burke of a French traditional song from Languedoc, Se Canto, which the choir is taking with them soon on a visit to that area of France.

One can predict confidently that the South Chiltern Choral Society will perform superbly as exemplars of the high standards of choral singing we have in this country.  But if they really want to take the French by storm, they could sing Se Canto from memory. Let us wish them every success.