A Feast for Christmas 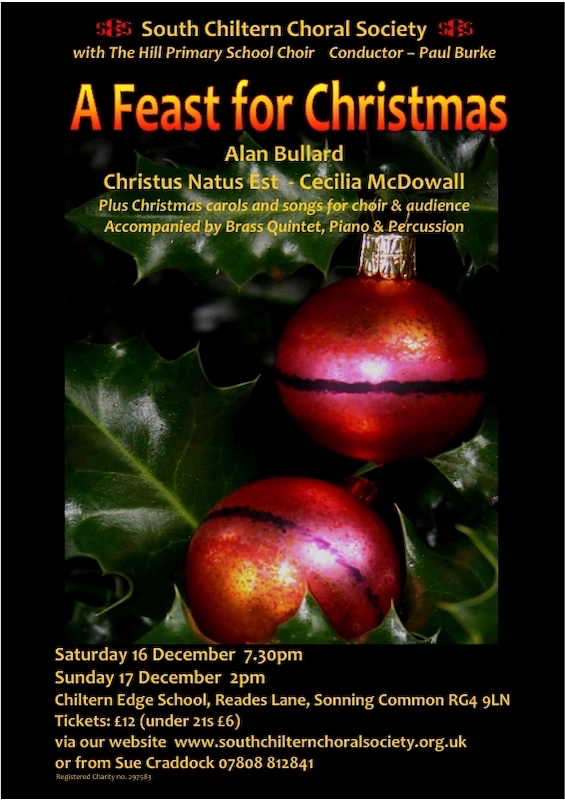 A True Christmas Feast of Music

This year the South Chiltern Choral Society produced a real cornucopia of Christmas delights, many with a distinct home-grown element. Paul Burke conducted and Ian Wesley accompanied on the piano. They were joined by the Hill Primary School Choir, from Emmer Green, the Chiltern Brass Quintet and the percussionist Alex Pullen.

All these participants opened the concert with a rousing performance of Christus Natus Est  by Cecilia McDowall. This is a highly effective piece combining a number of ancient carols in Latin and French with the more strident brass balanced by a calmer, more majestic role from the choir. The overall effect, delivered with great conviction, was very powerful.

South Chiltern commissioned A Feast for Christmas from Alan Bullard ten years ago and performed its premiere. To celebrate its tenth birthday, Paul Burke, the choir musical director, has revived it.  The piece uses the choir, children’s choir, brass quintet and narrator to feature a series of movements covering both the jollier and more reflective elements of Christmas. One of the pieces is based on text adapted by a choir member, Liz Harrison. All elements were performed with great confidence and the overall effect was delightful. Even the audience had a chance to join in at the end!

After the interval – and much-appreciated refreshments- there was a series of carols sung by the audience and choir interspersed with jokes and a number of shorter pieces. The first of these was the first performance of Tell me a story of Christmas written by two choir members – Margaret Horne (music) and Sue Alexander (text). This was followed by the clear, enthusiastic and accurate rendering of three very different carols by the children’s choir directed by Sue’s daughter Victoria. Children’s choirs are always a popular feature of these concerts. The quintet then gave us a moving performance of O magnum mysterium and a lively Ain’t Misbehavin’ . The last solo of the evening was by Alex Pullen, a young man with great potential. He played two pieces on the marimba with great skill and electrified the audience. After the O Come All Ye Faithful which traditionally ends the Christmas concert, the evening was completed by a very lively rendering of Jingle Bells.

It was all-in-all a real delight and the audience left very “Christmased”.