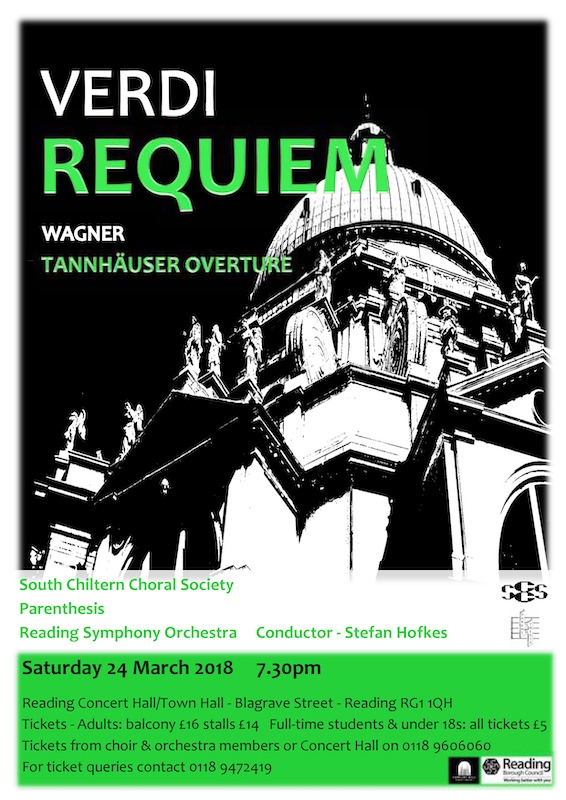 And if the Concert Hall’s foyer was buzzing, so was the stage, packed with Reading Symphony Orchestra and the combined forces of South Chiltern Choral Society, Parenthesis and the London College of Music Chorus. At the helm was RSO’s Music Director Stefan Hofkes.

The concert opened with Wagner’s weighty Tannhäuser Overture, one of opera’s longest and finest preludes.  A microcosm of the drama to follow, it depicts the struggle between good and evil, the majestic hymn of the pilgrims (good) recurring again and again in conflict with the “evil” wild Venusberg rhythms.  With the benefit of a large violin section, with strength in depth, the RSO gave a superb account.  Horns, brass and violins combined to produce the power the work’s turbulent narrative demanded. The upper strings rose to every virtuosic challenge.

Completed in 1874, Verdi’s requiem mass is scored for solo quartet, mixed chorus and full symphony orchestra. Deeply religious, it was composed, ironically, by a sceptic, Verdi being described as “a very doubtful believer”.  The RSO and massed choirs did full justice to this monumental work, supporting an imposing quartet of perfectly balanced soloists, each with sufficient projection to compete with the large forces behind them.

The bass, Will Thomas, dropped out through illness. Matthew Buswell stepped magisterially into his role with a fine rich voice. Soprano Sarah Baillie, whilst not extrovert, had a stunning voice that cut like a knife through butter at both bottom and top ends of the spectrum. Tenor Oliver Johnston was passionate and gave his all, while mezzo-soprano Katie Stevenson was especially expressive, her tone a satisfying marriage of projection and roundness.

This requiem’s 85 minutes of relentless energy revolves around this operatic quartet, with the chorus accorded a more supporting role.  Orchestrally, it is a trade-off between clarity and power — and in this instance the latter won the day.  The only downside was that the Concert Hall’s acoustic, being front-stage loaded, favoured an already full-bodied blanket of sound, difficult for the chorus to penetrate, especially in the oft-repeated, glorious Dies Irae.

When they did come through there was great cohesion, excellent balance and a lovely sound. They gave sympathetic support to the quartet in the Lacrymosa at the end of section two, and in the Sanctus and the Agnus Dei. In the Libera Me’s fugue they held together magnificently, despite being separated by the central organ pipes.  The soprano and mezzo were a fine duet in Recordare, its rubatos nicely managed, while the complex trio in Lux Aeterna was beautifully executed.  Soprano Sarah Baillie excelled in the Offertorio’s Domine Jesu, rising imperiously above the full complement of the RSO, who were outstanding.

This was an evening to remember and hopefully the opening shot in a potential long-term collaboration between these high-quality local groups.