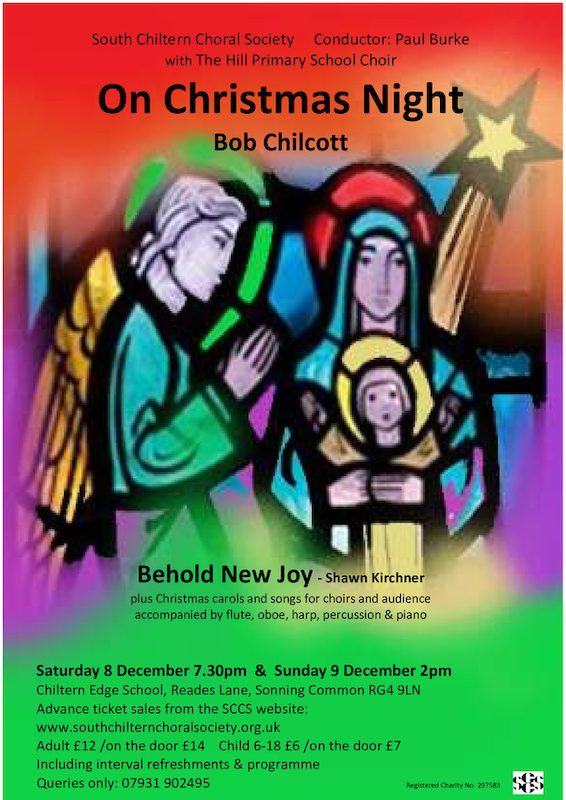 IT’S that time of the year again and the South Chiltern Choral Society were in action at Chiltern Edge School, as they have done so for many years.

Same format: some major Christmas pieces, a children’s choir, and audience carols. Nothing wrong with this format at all — there’s something for everyone and it works well.  It got me thinking, however. What do you do with old carols? There are so many wonderful tunes, so you can bring them up to date in a more modern setting or blend them in with other tunes or just play them as they were written.  I really don’t know what’s best, but if nothing changes then some music can become static. Over the years composers have developed different styles and whilst it’s not appreciated by everyone at the time, it eventually becomes commonplace.  In that way music lives!

Shawn Kirchner is a contemporary composer from Iowa and is now working in Los Angeles. His work Behold New Joy is described as a lively, singable suite of ancient carols dating back to a Finnish carol book written in 1582.  It was certainly a good piece to open the concert with and I particularly liked the orchestra of flute, harp, oboe, percussion and piano. It was well sung.

Following that and as a complete contrast was On Christmas Night by Bob Chilcott.  This is again a sequence of original carols interspersed with some new writing and it is altogether a more contemplative piece in part.  It was an opportunity to introduce the children’s choir — from The Hill Primary School, Emmer Green — who led the original tunes.  It’s such a shame that in places the adult choir dominated the piece and as a big ensemble tended to drown out the young voices. Attention to such detail is important.

The second half was an opportunity to hear from the individual choirs in their choice of Christmas music and the South Chiltern sang some old favourites and one of the most memorable was A Maiden Most Gentle, written by Andrew Carter for a convent in York. It is reminiscent of an old chant that I heard at a pageant in Brittany and was a lovely setting.

Then the children sang some more up to date Christmas songs, which they undoubtedly enjoyed.  It was so nice to see their development beyond single tunes to bring harmony and dynamics to their singing, which is important at this stage of their development.  I did notice, to my delight, one of the children mouthing words of a song being performed by the adult choir. I don’t know if she heard a parent practising or whether it was just listening to the final rehearsals, but it was a brilliant example of how music is passed down the generations.

The hero of the hour had been billed as Alex Pullen, a percussion soloist, who has been appearing (and winning) some regional and international competitions. He played two pieces on the marimba, which was a delight to us all.

Quite a musical pleasure in the build-up to Christmas. Long may the South Chiltern Choral Society deliver this formula.