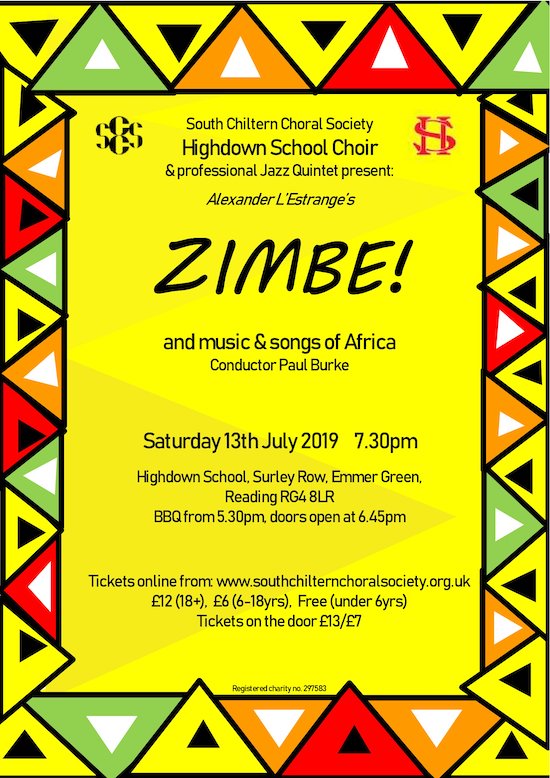 Zimbe
with the Highdown Singers from Highdown School

THE concert on Saturday evening given by the South Chiltern Choral Society with Highdown School choir provided a delightful mix of contemporary music sung by adults and children.

The first half of the concert acted almost like a warm-up for the main piece, Zimbe! by Alexander L’Estrange.

The Highdown Singers, the school’s terrific choir, opened the evening with contemporary songs including Mamma Mia (Andersson/Ulvaeus/Anderson) and You Raise Me Up (Løvland).  After a slightly nervous start, the singers got into the swing and obviously enjoyed the music.  One of the music teachers accompanied the first two songs while James Chitham-Mosley conducted but then three exceedingly talented six-form students took over.  Abby Asbury and Tara Najaf provided competent accompaniments while a third, Natasha Parker, bravely conducted.  I also noted one small pupil singing the whole evening off copy.  Impressive.

The South Chiltern Choral Society closed the first half singing Weeping (Heymann arr. L’Estrange) which has as a refrain, N’kosi Sikeleli Africa, now known as South Africa’s national anthem. This was sung beautifully with much feeling and was certainly moving.

A splendid jazz ensemble opened the second half. They played three fabulous African jazz pieces, Mandela and The Market Place by Abdula Ibrahim (who lived in self-imposed exile in the USA) and Yakhal Inkomo (Winston “Mankuku” Ngozi), which is a song about a raging bull — clearly symbolic of the political turmoil, but which managed to escape censorship.

The jazz quintet was vibrant and joyful and, in traditional jazz manner, each player took a lead greeted by applause from the aficionados in the audience. Tessa Frye on saxophone was especially outstanding.  This was perfect music for a summer’s evening and set the scene for the second half of the concert, a blend of song and jazz.

After the interval, the quintet was joined by the adult choir and the school choir (room was tight on the stage) for Zimbe! — translated as “come and sing”.  L’Estrange’s widely performed vibrant cantata comprises a collection of songs based on African music from various traditions, and in different languages including Swahili and Xhosa.  These depict episodes of African life — a lullaby, a wedding song, drinking songs and songs of worship.  For this part of the concert it would have been helpful to have the words and translation in the programme.

Unusually, there were two conductors — Chitham-Mosley continued to conduct the school choir and Paul Burke the choral society. Both deserve warm congratulations on this dual role.

The work was written for non-professional child and adult singers in choral societies, schools and for whoever wants to sing. Since its premiere in 2008, it has been performed around 150 times.  It requires a jazz accompaniment which needs a large choir in order to balance acoustically. This wasn’t always achieved and occasionally the choral music was lost.  The music weaves voices together as well as showcasing sections. The mix of voices worked admirably and was ideal for this inspirational performance.

The musical directors of both choirs, South Chiltern Choral Society and Highdown School should be congratulated for this wonderful collaboration: the choral society for demonstrating support for music in our schools, and the school for embracing the opportunity. It was an unusual and very enjoyable evening.