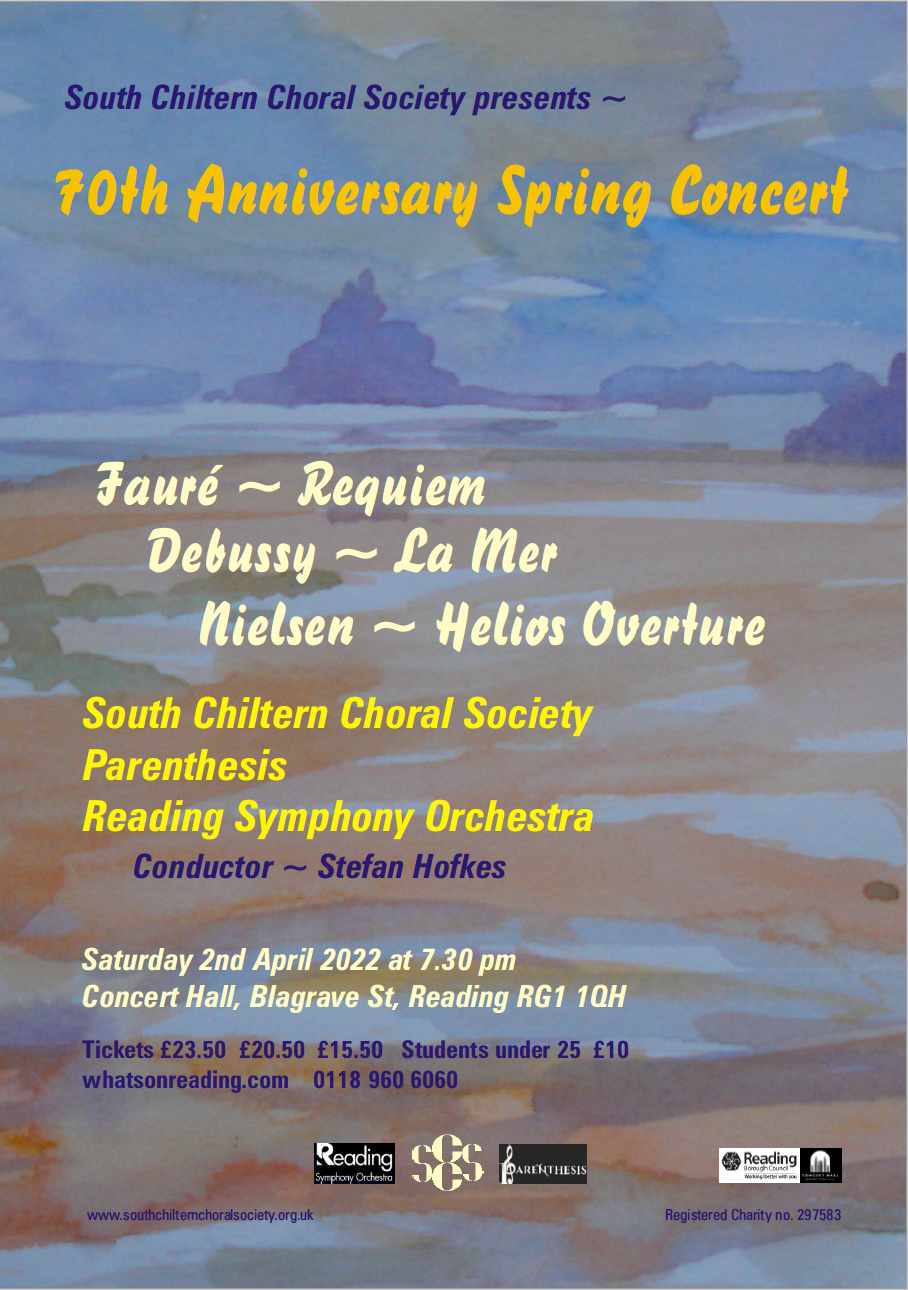 FOR this special concert to commemorate the 70th anniversary of the South Chiltern Choral Society, they were joined by Reading Symphony Orchestra and Parenthesis, another local choir.

Conductor Stefan Hofkes introduced the event and welcomed everyone back to what was the orchestra’s first major concert since the pandemic.  The evening featured two atmospheric French pieces, Debussy’s La Mer and Fauré’s tranquil and melodious Requiem.

The opening piece was the Helios Overture by Carl Nielsen, which depicts the glorious image of a golden sun, rising and falling through the course of a day.

The overture began with mysterious murmurings from the lower strings before horns emerged with a melodic, carefully-shaped theme which expanded through the orchestra.  There were some elegant moments from the wind section with the more colourful passages complemented by a rich-toned string accompaniment.

La Mer, completed in 1905, is an impressionistic recreation of the sea in three movements. The first section unfolds naturally, building to a swell during which one can hear the waves, breaking in the midday sun. Again, there was a good balance between the intertwining strings and wind solos — the cor anglais playing was particularly expressive — while the timpanist produced exciting surges of sound and both harpists provided lively contrasts of rhythm.  The second movement, Play of the Waves, is a scherzo which builds up to a frenzy of activity. Here the strings played with gossamer-like delicacy, which captured the sparkling light of the dancing waves.  The darker, more turbulent third movement, with its impending warning of a storm, produced wonderful tones from the brass section before the whole orchestra combined in a final crescendo towards a powerful ending.

After the interval all musicians joined forces for Fauré’s Requiem, composed after the death of his father. The emphasis is on eternal rest and consolation and aside from some darker passages, the music is overall uplifting and serene.

The solemn Introit, sung by the choir, was well measured and suitably prayer-like. In the following Kyrie, the cello section shone with mellifluous tone in a sweeping counter-melody against the singers.  The lush string playing continued into the Offertorium before altos and tenors sang soulfully in close harmony. This was especially moving in the unaccompanied passages.

Soprano Harriet Burns gave a beautiful rendition of Pie Jesu, seamlessly mastering long phrases with her clear, confident voice.  Benjamin Bevan, baritone, brought a compelling presence to the stage. In the Offertorium and more dramatically in Libera Me, his stream of fine, euphonious phrases was a high point of the evening.

The final In Paradisum conveyed an otherworldly transparency, despite some tiredness in the higher voices, and the closing phrases — all singing pianissimo — brought the work to its final place of rest.

Congratulations to South Chiltern Choral Society for this polished performance.