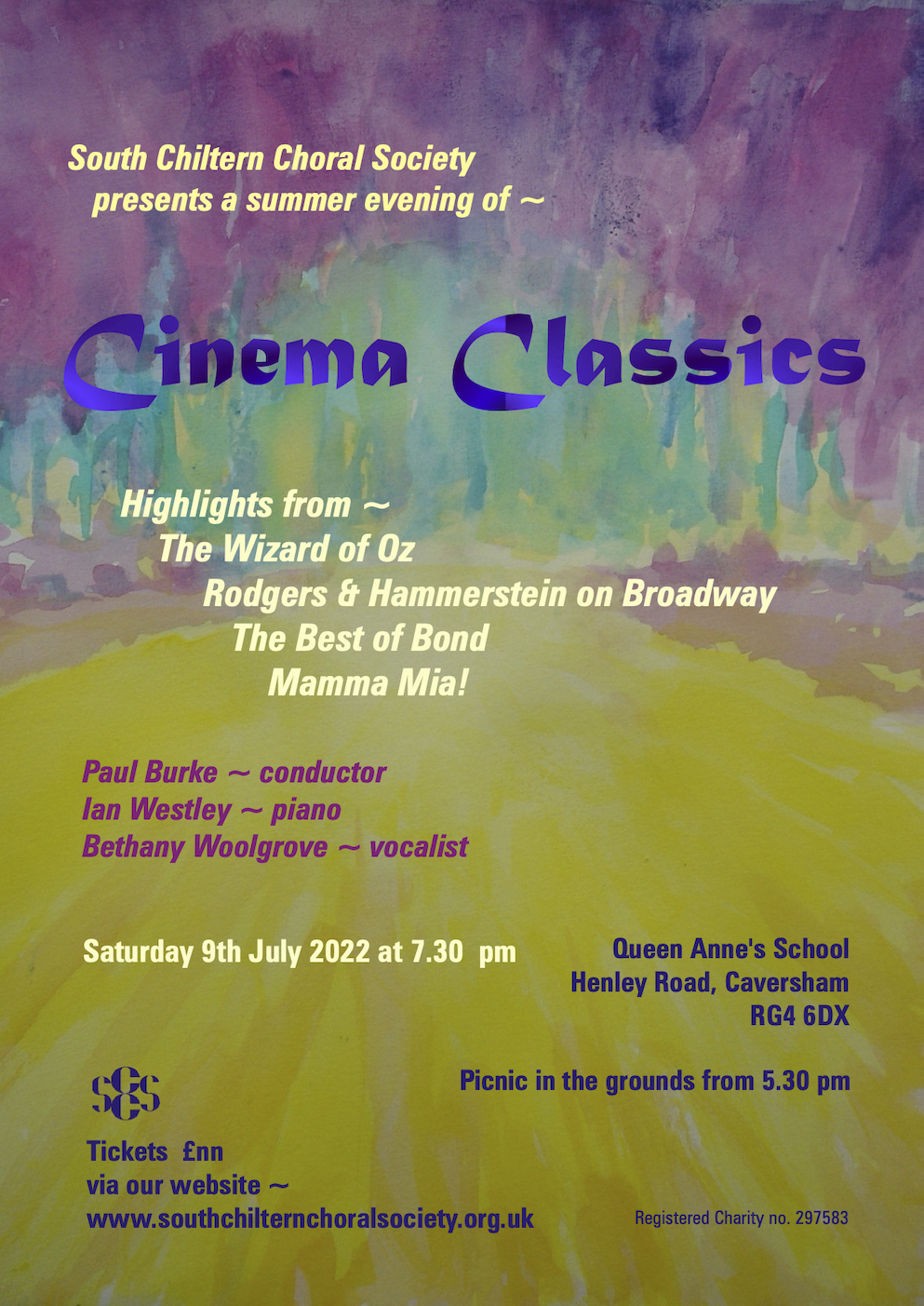 THE audience’s emotions were “shaken and stirred”.

Queen Anne’s School and its extensive grounds were the glorious setting for a picnic and summer evening concert performed by the South Chiltern Choral Society.  The school hall, opened in 1936, provided excellent acoustics to hear the 50-plus strong choir.

The evening’s theme was music from cinema classics, starting with a delightful choral revue from The Wizard of Oz, including Somewhere Over the Rainbow.

Conductor Paul Burke introduced each segment with confidence and humour, providing very interesting facts, even though most of the pieces were already well known.

The classic film Casablanca provided him with the opportunity to introduce the popular melody As Time Goes By and ask pianist Ian Westley to “play it again, Ian”.  Ian played masterfully and with great sensitivity.  A piano duet followed where Ian and Paul excelled with a technically challenging arrangement from Gershwin’s Porgy and Bess.

Soloist Bethany Woolgrove then stepped forward to sing Ivor Novello’s classic I Can Give You the Starlight from The Dancing Years.  Bethany sang with both sweetness and assurance, continuing with two songs from Frederic Loewe’s My Fair Lady, Wouldn’t It Be Loverly and I Could Have Danced All Night.

The first half ended with the full choir singing a medley of Rodgers and Hammerstein on Broadway with richness of tone. They obviously really enjoyed singing popular classics such as The Sound of Music. The audience responded with enthusiasm and joy for this excellent entertainment.

Their high spirits were further enlivened by being served complimentary glasses of wine in the interval. The second half opened with a medley of popular songs from the classic Mamma Mia!, written by Abba’s Benny An

dersson and Björn Ulvaeus, arranged by Mac Huff, including I Have a Dream and Thank You for the Music.

Bethany Woolgrove then sang Stephen Sondheim’s Children Will Listen but her softly sung words were initially hard to hear against the piano, although the song soon reached a crescendo with her higher range notes soaring across the audience.  Her rendition of Leonard Bernstein’s I Feel Pretty from West Side Story was performed with great animation to the delight of the audience.

The final part of the performance was a choral medley of the “best of Bond”, arranged by Ned Ginsburg, starting and finishing with the iconic sound of the film theme tune.  The audience clearly enjoyed this rousing finale, giving thunderous and prolonged applause.

After the concert, Paul Burke said how pleased he was with the performance from his singers.  The success of his teaching could be measured as the audience started to stream out of the concert hall into the evening sunshine.  The distinctive sound of the Bond theme being repeated by many members of the happy audience could clearly be heard.